A few days ago, I had a very bad experience with one of the branches of Landbank. I went there in the hopes of opening a savings account but ended up almost in tears because of humiliation, a tinge feeling of being discriminated and a heart half-filled with anger. “Oh, how I regretted going to that bank!” I told myself. I have never experienced such treatment from other banks before. So as I left the bank,  my mind was already constructing a very long complain that I would be sending later on in their customer service email. But at the back of my mind, I was already bracing myself for disappointment that my email would be left unanswered.

So what did really happen?

You see, I have always been a shy person, an introvert as well. And I do have that fear of the unknown, of being humiliated by others. That has been my weakness for a very long time. Nahihiya ako kahit magtanong, dahil baka ipahiya o mapahiya ako. But I gathered my courage and told myself, “Okay lang magtanong –wala namang mawawala sa akin, eh.”

So I went to the said bank, only to face humiliation. I was entertained by a junior employee, but since the junior employee wasn’t sure of what answers to give me, he asked his senior some questions, to which the senior employee grudgingly answered. As a result, his irritation to the junior employee was thrown at me, as evidenced by his non eye-contact with me (he was busy reading and flipping some pages, and while he directed some answers towards me, never bothered looking at me all through out the time), a voice tone that was heavily laced with irritation because my presence interrupted his work, and answers that was almost a tad discriminating.

Now, while I do understand that he might be busy (besides, I was asking questions at the junior employee not at him) and that I’m no millionaire, but his behavior towards me was uncalled for. I won’t get on all the details of what had transpired (mainly because this isn’t the point of my blog post), but I was beyond appalled on how that employee had treated me.

Apparently, my email got through to their customer service, as they sent me an email addressing the issue. The email was further escalated to the said branch, and one fine morning I got a call from the branch manager. To my surprise, the senior employee (he introduced me his name, but let’s not divulge his identity) was the one who called, apologizing for his behavior and explaining his situation. I can hear sincerity in his tone, even offering his assistance if ever I still wanted to open an account in their bank. Right of the bat, I accepted his apology. Why? Because the anger I had felt during the incident was no longer there. I had felt humiliated that time, but he humbled himself at me to ask for an apology.

You see, anger is like fire –if you fuel the flame, the fire will ignite even more; if strong wind blew at the fire then flames will spread; but if you will throw water over the flame, the fire will die. If we fuel our anger by justifying our emotions that we had been wronged and we have every right to get angry, our anger will continue to grow. If we keep on thinking about our irritation, of what had happened that caused us such emotion, anger will settle in our hearts and would later on consume it. But if we let our anger subside and reflect things over when our head is cooled down, we will be able to think more clearly.

“Why was I angry again? What had caused to me get angry? Oh, maybe the gentleman was just busy, or tired, or hungry. Maybe that was why he was rude towards me! Still, he had been rude at me. I hope my email will be able to help him realize how his actions offended me.”

I was glad both the bank employee and the manager called me several days after the incident. If they had called me on that very same day, I might have been quick to snap at them both because the emotions were still there, which would probably create a dispute.

“A hot-tempered man stirs up strife, But the slow to anger calms a dispute.” Proverbs 15:18

Our actions will yield consequences. Out of frustration, I had sent a lengthy email. Of course, it is everyone’s right to file a complain. In my case, I did it out of anger and not because I was concerned with their customer service. My actions might have repercussions –the bank employee might lose his job or he will be reprimanded. Do I really want that to happen to anyone? No. If he will lose his job, his family might be affected, too.  Is that what I really want? The consequence will have a domino effect.

Proverbs 29:22, “A man of wrath stirs up strife, and one given to anger causes much transgression.”

So I accepted his apology and let anger die.

Ephesians 4:26“In your anger do not sin” ; Do not let the sun go down while you are still angry… 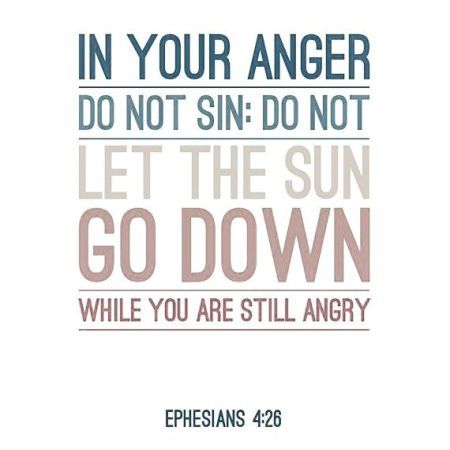 While my reasons for getting angry is minuscule compared to the injustices done to other people, what I had learned with my situation is that in anger, I was not able to think clearly. I allowed myself to get caught up with emotions that if I hadn’t had any enough self-control, I might have confronted the offender right there and then and who knows what else could have happened.

A person’s wisdom yields patience; it is to one’s glory to overlook an offense. Proverbs 19:11 NIV

Refrain from anger and turn from wrath; do not fret—it leads only to evil.
For those who are evil will be destroyed, but those who hope in the LORD will inherit the land. Psalm 37:8-9 NIV

***
I pray that God will also calm your angry heart, so you can hear His words, His guidance, His instructions, just as He has calmed mine.

MAXINE LAUREL fancies herself a writer, who goes crazy over Jung Yong-Hwa, believes Legolas is her fictional husband, drools over Damon Salvatore’s fantastic abs and a certified cray-cray. She loves reading and is obsessed with the color pink.